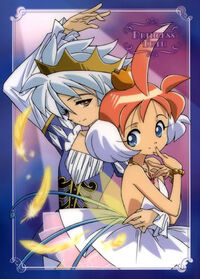 Princess Tutu was originally broadcast in two seasons. The first season, "Kapitel des Eies" ("Chapter of the Egg"), consisted of 13 half-hour episodes. The second season was broadcast as 26 quarter-hour episodes, to conform to the format of the time slot, so that each episode was split into two parts. These were brought back together in the DVD release as 13 complete episodes. The second season is called "Kapitel des Junges" ("Chapter of the Chick") in R2 DVDs, and "Kapital (sic) des Küken" ("Chapter of the Fledgling") in R1 DVDs.

Retrieved from "https://princesstutu.fandom.com/wiki/Anime?oldid=6557"
Community content is available under CC-BY-SA unless otherwise noted.