Fakir is Mytho's roommate, guardian, and protector. He is also a talented ballet dancer at Gold Crown Academy.

At the beginning of the anime, Fakir appears cold, rude, and possessive, especially to Mytho. He speaks brusquely and doesn't care if anyone's feelings are hurt by what he says.

During the first four episodes of the anime, it is unknown why Fakir would constantly scold Mytho and not want him to have a heart again. For instance in On the Night of the Fire Festival, when Fakir found out that Mytho was starting to have a mind of his own, he punished Mytho by locking him in a dark closet. Duck came by and tried to save Mytho but it was futile when Fakir restrained her. Duck tried to reason with Fakir about allowing Mytho to have a heart, but he refuses to listen. Fakir said that if the prince was to ever regain his heart, he would lock Mytho away into darkness; in hopes that Mytho would become numb to everything, including his feelings.

However, it is later on revealed that he can be very kind, caring, and protective of Mytho. In Dreaming Aurora, Fakir held and comfort Mytho with words and touch after a shard of his heart returned, causing him to be terrified.

In Crow Princess, Fakir ended up having to tend to Mytho more than usual due to his constant fears. Fakir truly does care deeply for Mytho and he's willing to do everything in his power to protect him. Deep down, Fakir does have a gentler side which he began to show to Duck once she learns of his inner pain.

Although in Banquet of Darkness and onward, Fakir is shown to be embarrassed and disdain whenever Duck reveals herself in both her human and duck form. Especially when she becomes naked after she transforms back into her human form. But towards the end of the anime, Fakir becomes deeply emotional when he wrote about Duck who is badly wounded as she sacrifices herself to dance with everyone who turned into crows and never lose hope. He later comes to her aid as he finally finishes writing the whole story.

Fakir has long dark green hair and green eyes. He usually wears his school uniform but at other times he wears clothes that have his shirt sleeves torn. In ballet class, he wears a black unitard with under a dark blue shirt. He also wears dark blue leg warmers and black ballet slippers.

He also wears a knight motif during his role as a knight to deal against Princess Kraehe while wielding his sword. He later discovers Ahiru as Princess Tutu when she saves him and together to rescue Mytho from Kraehe.

In the near end of the anime, he retains his white button shirt, pants and shoes from his school uniform after he removes his tie as the sleeves are folded into a cuffs when he additionally wrote the Prince and the Raven made by Drosselmeyer to add Ahiru in her duck form just to save Mytho as Prince Siegfried and to prevent him to shatter his heart for the second time to stop the Raven. He also has a bandage on his right hand after he stabbed himself with the bladed tip of his feathered pen due to Drosselmeyer's control.

At the end of the anime, Fakir now wears a green vest with a white long sleeved button shirt, dark blue formal pants, and black shoes.

Fakir is the great-great-great grandson of Drosselmeyer and has inherited the power to affect reality by writing stories. When he was a child, he attempted to use it to save the town from ravens by writing a story but both his parents were killed trying to defend him in the attack. Since then he was afraid to use his power and eventually forgot his power altogether.

Drosselmeyer's story The Prince and the Raven included a knight who was to protect the prince and ended up dying by the claws of the raven. Fakir is thought to be the reincarnation of a said knight from the story due to the scar-like birthmark that cuts across his chest, similar to the wound that ended the knight in the fairy tale. When he found Mytho as a young boy, Fakir decided to take on the role of the knight and be the heartless prince's protector. Fakir wanted to shatter Mytho's heart. This later changes throughout the episodes when he was forced to teamed up with Duck after she saves him as Princess Tutu to rescue Mytho from Rue as Princess Kraehe. Despite he became bad when he first met Duck due to her conversations with Mytho, Fakir was the one discovers both of her forms between a duck and a human and became extremely embarrassed and disdain after witnessing her forms. After they rescue Mytho, he was barely alive after he was rescued by Edel as her body parts were used to put up the fire to warm him and was aided by both Duck and Mytho.

In the second season, Fakir was suspended due to being framed by Mytho who is now tainted with the Raven's blood for pushing him off to their dormitory's window before Princess Tutu rescued him. He was informed by Princess Kraehe about his condition. But as Duck informs him about Mytho's attempt on stealing other female hearts as a sacrifice for the Raven. He decided to team up together. Fakir also introduces Uzura to Duck. Fakir also manages to snap Mytho's senses, allowing Princess Tutu to free Freya from his control. Fakir is also seen to take care of Duck when she was injured from the Ghost Knight and trying to know more of his pasts as a direct descendant to Drosselmeyer by turning himself as an oak tree as a final test to overcame his fear to use his power to write stories but only to be rescued by Duck as Princess Tutu after hearing her voice. Before taking the final test, he was acquainted with Autor who is impressed on Drosselmeyer's stories as well as he is for being his descendant despite he stops Duck from disturbing him. Fakir was rescued again by Duck as Princess Tutu from getting executed by the group of Bookmen after they took him at Drosselmeyer's grave. He also rescues Duck from being trapped by Drosselmeyer in return by writing a manuscript about her as Uzura tries to turn back time due to the moving gears were moved in reverse while Autor helps him in how to stop moving backwards by writing it. Fakir is also disgusted to Drosselmeyer for what he had done to the story he had written.

In the near end of the anime, Fakir takes care of Duck while he goes to Autor on his house to need his assistance because of his knowledge of Drosselmeyer stories when he begins to write what Drosselmeyer had left off in the Prince and the Raven. During Mytho's battle against the crows and Duck's pendant is unable to remove, he was controlled by Drosselmeyer to write on its own but manages to break free by stabbing his right hand with a knife. Fakir leaves to rescue Duck in the Lake of Despair and they have an intimate dance together before Duck's pendant became loose. Fakir also added Duck on the role to help Mytho by giving the final heart shard as Princess Tutu until she reverts back into a duck permanently as Mytho witnessed who she was and thanking him for regaining his heart back and he transforms into Prince Siegfried to battle the Raven. Fakir became horrified and emotional when Duck was badly injured by the townsfolk who turned into crows as she allows Mytho as Prince Siegfried to rescue Rue after both her and Fakir manage to prevent Siegfried from shattering his heart for the second time. Fakir continued writing after Autor saves him from getting killed by the leader of the Bookmen, Duck manages to purify the townsfolk in a glowing yellow light forming an image of a white swan and Princess Tutu in flashes of light and the power to defeat the Raven is 'hope'. After the Raven is destroyed and Duck passes out due to her serious injuries, Fakir stops writing and immediately comes to her side. Upon entering the top of the clocktower, he discovers that his great-great-great grandfather Drosselmeyer was responsible for controlling the whole story to make things tragic by using the machine which was tainted by his blood after his death as Fakir destroys the machine entirely and decides to continue writing for both Prince Siegfried and Rue to live happily and Siegfried finally make peace with him before he and Rue departed.

In the end of the anime, Fakir was writing a new story while Duck is with him at the lake.

Mytho: Fakir and Karon found Mytho on the streets after the infamous attack of the ravens. Fakir would often scold the prince for his reckless rescues of any and every creature in need, and became his protector and consultant, determined that, after the death of his parents, he would let no one else he cared for die.

Duck/Princess Tutu: At first, Duck and her feelings for Mytho were unwanted and annoying in Fakir's eyes, and he intentionally interrupted their conversations out of jealousy. Princess Tutu was deemed an enemy. Later, while they work together to help Mytho, Fakir grows increasingly fond and protective of Duck. By the end of the series, Fakir vows that no matter her form, he will stay with Duck forever.

Rue/Princess Kraehe: Fakir tolerates Rue's relationship with Mytho because he sees nothing from it that will harm the prince. Princess Kraehe, on the other hand, is treated with scorn and referred to as a "filthy crow".

Karon: Gold Crown Town's blacksmith, Karon became Fakir's foster father after his parents' death. He loves his adopted son very much and encouraged his belief that he was the legendary knight reborn. After being possessed by Mytho's heart shard of regret, Karon is overtaken by said emotion and loses his faith in his raising of Fakir. After Princess Tutu draws out the shard, however, Karon's doubts are cleared and he begins to have faith. 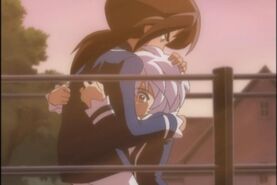 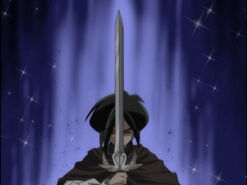 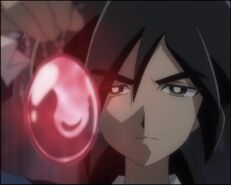 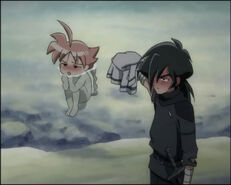 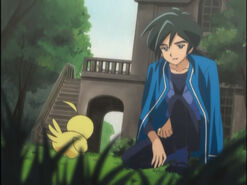 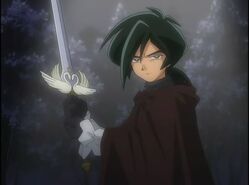 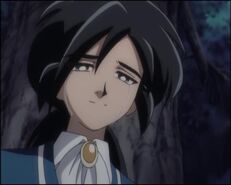 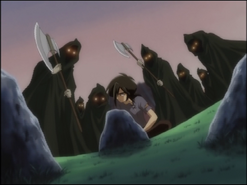 Add a photo to this gallery
Retrieved from "https://princesstutu.fandom.com/wiki/Fakir?oldid=6789"
Community content is available under CC-BY-SA unless otherwise noted.