Princess Kraehe (プリンセスクレール Purinsesu Kurēru) is the daughter of The Raven and the alter ego of Rue. She plays as the nemesis for the majority of the series, as her intents are to restore her father but as well to have her prince Mytho, even if it means to prevent him from having his heart restored.

Princess Kraehe attempts to keep Princess Tutu from returning the pieces of Mytho's lost heart. She is even colder and far crueler than Rue is normally, but there are hints of her true personality even when transformed.

In the second season, Kraehe dips one of Mytho's heart shards into the Raven's blood, tainting Mytho's personality and twisting him from the kindhearted prince she fell in love with. At first she enjoys that Mytho sides with her, but as his personality becomes more and more violent, she starts to doubt her choices.

When she was a baby, Rue was stolen from her parents by a group of crows who served her adoptive father, The Raven, who named her Kraehe. She grew up believing herself to truly be the Raven's daughter, who by some strange twist of fate, ended up being trapped in an "ugly human body".

One day, when being harassed by the crows who served her father, Kraehe was saved by Mytho, and she instantly fell in love with the heartless prince. When she asked her father about him, he told her that despite being their greatest foe, Mytho was the only person who would ever love her, and so she intended to make him her prince. For most of her childhood, the little girl always tried to get Mytho to pay attention to her, usually by dancing, but became miserable when he had to leave.

When Mytho went to study ballet at Gold Crown Academy, Kraehe was told by the Raven to 'pretend' to be a human girl and make Mytho fall in love with her. After slipping up and calling him Prince, she sealed away the memories of being Kraehe and took the name 'Rue'.

As Princess Kraehe, Rue has a very dark and deeply wounded personality. Her jealousy and insecurity interferes with Tutu's attempts to restore Mytho's heart, fearing that he will fall in love with someone else. In the end, however, her love for Mytho redeems her: when she truly is about to lose him, she sacrifices herself for him.

She also loved her father, The Raven, and would do anything to revive him; however, the Raven doesn't take her as his beloved daughter and is only using her as a means to revive him.

When transforming into Princess Kraehe, Rue takes on a new outfit. Her hair is pulled up and she adorns a black dress edged with black feathers, black stockings and black ballet slippers with laces around the ankles. She is first seen wearing this outfit in Episode 8, when she becomes Princess Kraehe. 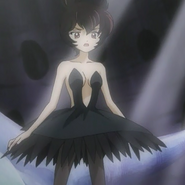